(July 8, 1944 – April 11, 1966) was a United States Air Force Pararescueman who gave his life aiding and defending a unit of soldiers pinned down by an enemy assault in Vietnam. He was initially posthumously awarded the Air Force Cross, which was later upgraded to the Medal of Honor. He was the first enlisted recipient of the Air Force Cross medal, receiving the award in 1966. 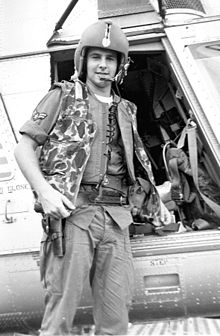 Flying on almost 300 rescue missions in Vietnam, Bill Pitsenbarger risked his life almost daily during the war rescuing downed soldiers and fliers. On April 11, 1966, the 21-year-old, known as "Pits" to his friends, was killed while defending some of his wounded comrades. For his bravery and sacrifice, he was posthumously awarded the nation's highest military decorations, the Medal of Honor and the Air Force Cross, becoming the first enlisted airman to receive the medals posthumously.

Pitsenbarger was born in 1944 and grew up in Piqua, Ohio, a small town near Dayton. When Bill was a junior in high school, he tried to enlist in the Army as a Green Beret, but his parents refused to give their permission. After he graduated from high school, he decided to join the Air Force, and on New Year's Eve 1962, he was on a train bound for basic training in San Antonio.

He was later sent on TDY (Temporary Duty) to Vietnam. Upon completing his first TDY assignment, he volunteered to return and received orders in 1965 to report to Detachment 6, 38th Air Rescue and Recovery Squadron at Bien Hoa Air Base near Saigon. His unit was composed of five aircrews that flew three HH-43F Kaman Huskie helicopters, His commander, Maj. Maurice Kessler, called him "One of a special breed. Alert and always ready to go on any mission."

On April 11, 1966, the Joint Rescue Center dispatched two Huskies from Detachment 6 to extract a half-dozen or more Army casualties pinned down in a battle near Cam My, a few miles east of Saigon. Upon reaching the site of the ambush, he was lowered through the trees to the ground where he attended to the wounded before having them lifted to the helicopter by cable. After six wounded men had been flown to an aid station, the two Air Force helicopters returned for their second load.

That Others May Live...

For the next hour and a half, Pitsenbarger attended to wounded soldiers, hacking splints out of snarled vines and building improvised stretchers out of saplings. When the others began running low on ammunition, he gathered ammunition from the dead and distributed them to those still alive. Then, he joined the others with a rifle to hold off the Viet Cong. Pitsenbarger was killed by Viet Cong snipers later that night. When his body was recovered the next day, one hand still held a rifle and the other clutched a medical kit.

A1C William Pitsenbarger armed with an M-16 outside the HH-43.

Although Pitsenbarger didn't escape alive, nine other men did, partially thanks to his courage and their devotion to duty.

He is buried in Miami Memorial Park Cemetery Covington, Ohio. His grave can be found in plot 43-D, grave #2.

The Medal of Honor

On December 8, 2000, at the National Museum of the United States Air Force, Bill's father, William F. Pitsenbarger, and his wife, Alice, accepted the Medal of Honor from Secretary of the Air Force Whit Peters.  During the same ceremony he was also posthumously promoted to the rank of Staff Sergeant. The audience included survivors from the battle, hundreds of Pararescue airmen, a congressional representative and the Air Force chief of staff.

The Medal of Honor Citation

The President of the United States of America, authorized by Act of Congress, March 3, 1963 has awarded in the name of the Congress the Medal of Honor posthumously to:

A1C WILLIAM H. PITSENBARGER
UNITED STATES AIR FORCE
for conspicuous gallantry and intrepidity in action at the risk of his life above and beyond the call of duty near Cam My, April 11, 1966:

Airman First Class Pitsenbarger distinguished himself by extreme valor on April 11, 1966 near Cam My, Republic of Vietnam, while assigned as a Pararescue Crew Member, Detachment 6, 38th Aerospace Rescue and Recovery Squadron. On that date, Airman Pitsenbarger was aboard a rescue helicopter responding to a call for evacuation of casualties incurred in an on-going firefight between elements of the United States Army's 1st Infantry Division and a sizable enemy force approximately 35 miles east of Saigon. With complete disregard for personal safety, Airman Pitsenbarger volunteered to ride a hoist more than one hundred feet through the jungle, to the ground. On the ground, he organized and coordinated rescue efforts, cared for the wounded, prepared casualties for evacuation, and insured that the recovery operation continued in a smooth and orderly fashion. Through his personal efforts, the evacuation of the wounded was greatly expedited. As each of the nine casualties evacuated that day were recovered, Pitsenbarger refused evacuation in order to get one more wounded soldier to safety. After several pick-ups, one of the two rescue helicopters involved in the evacuation was struck by heavy enemy ground fire and was forced to leave the scene for an emergency landing. Airman Pitsenbarger stayed behind, on the ground, to perform medical duties. Shortly thereafter, the area came under sniper and mortar fire. During a subsequent attempt to evacuate the site, American forces came under heavy assault by a large Viet Cong force. When the enemy launched the assault, the evacuation was called off and Airman Pitsenbarger took up arms with the besieged infantrymen. He courageously resisted the enemy, braving intense gunfire to gather and distribute vital ammunition to American defenders. As the battle raged on, he repeatedly exposed himself to enemy fire to care for the wounded, pull them out of the line of fire, and return fire whenever he could, during which time, he was wounded three times. Despite his wounds, he valiantly fought on, simultaneously treating as many wounded as possible. In the vicious fighting which followed, the American forces suffered 80 percent casualties as their perimeter was breached, and airman Pitsenbarger was finally fatally wounded. Airman Pitsenbarger exposed himself to almost certain death by staying on the ground, and perished while saving the lives of wounded infantrymen. His bravery and determination exemplify the highest professional standards and traditions of military service and reflect great credit upon himself, his unit, and the United States Air Force.

His name can be found on Panel 06E Line 102 of the Vietnam Wall.

The city of Piqua, Ohio, renamed a recreational park (which includes the municipal swimming pool) the "Pitsenbarger Sports Complex." The state of Ohio designated state route 48 as the "U.S.A.F. Pararescue Memorial Highway." The highway runs near the hometowns of four Pararescuemen who died in service to their country. This includes Pitsenbarger; Sgt. Jim Locker of Sidney, Ohio; Master Sgt. William McDaniel II of Greenville, Ohio; and Airman 1st Class James Pleiman of Russia, Ohio.  In addition to being designated Main Street through the city of Dayton—where the Wright Brothers designed their airplane—state route 48 also runs along Miami Memorial Park north of Covington, Ohio, where all four Airmen are buried.

The drill team of the AFJROTC unit at Martinsburg High School, Martinsburg WV is known as the Pitsenbarger Rifles.

The Community College of the Air Force (CCAF) awards a $500 Pitsenbarger Scholarship to the top 5% of each graduating class that is currently enrolled in a Bachelors program and submits a competitive award nomination package.